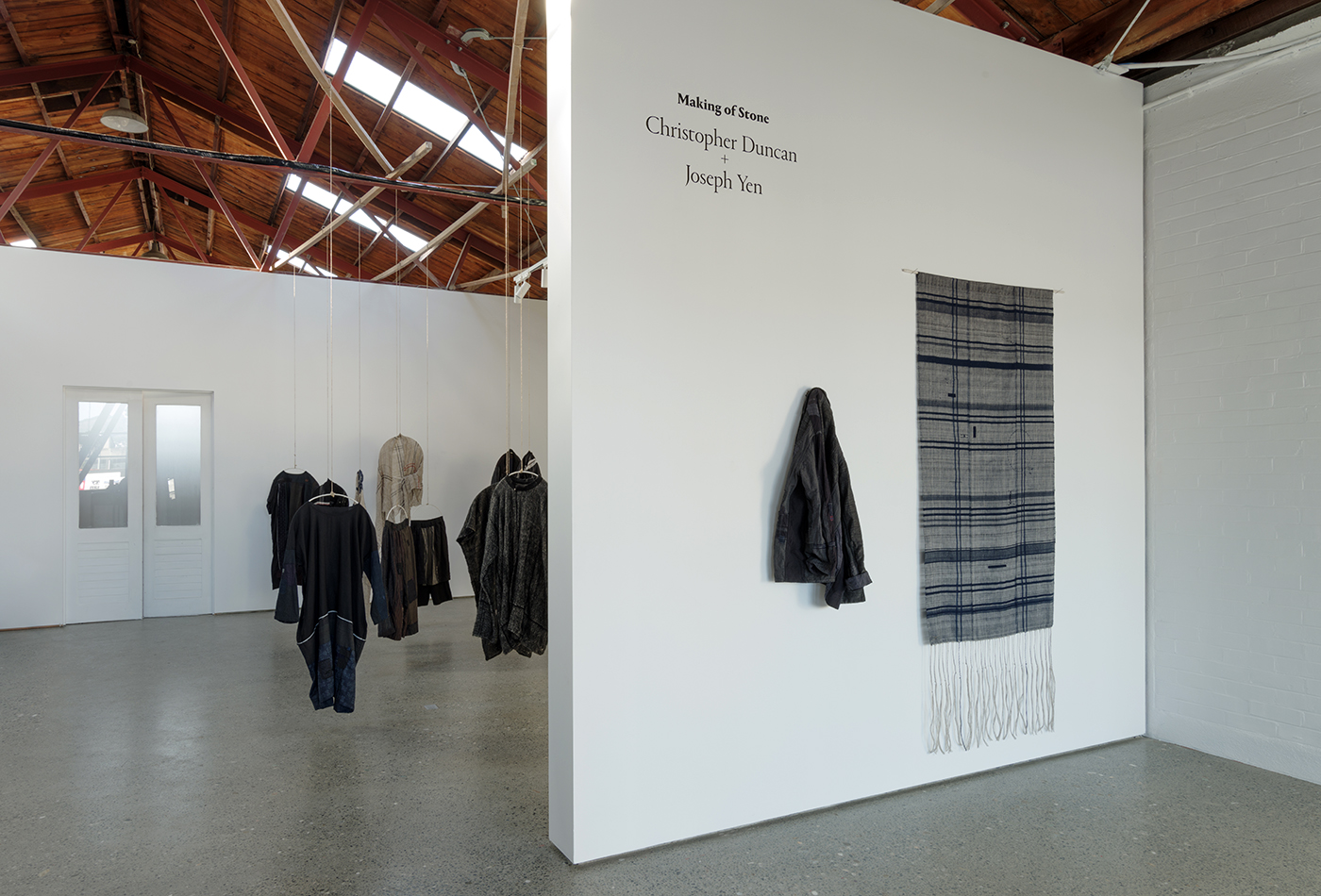 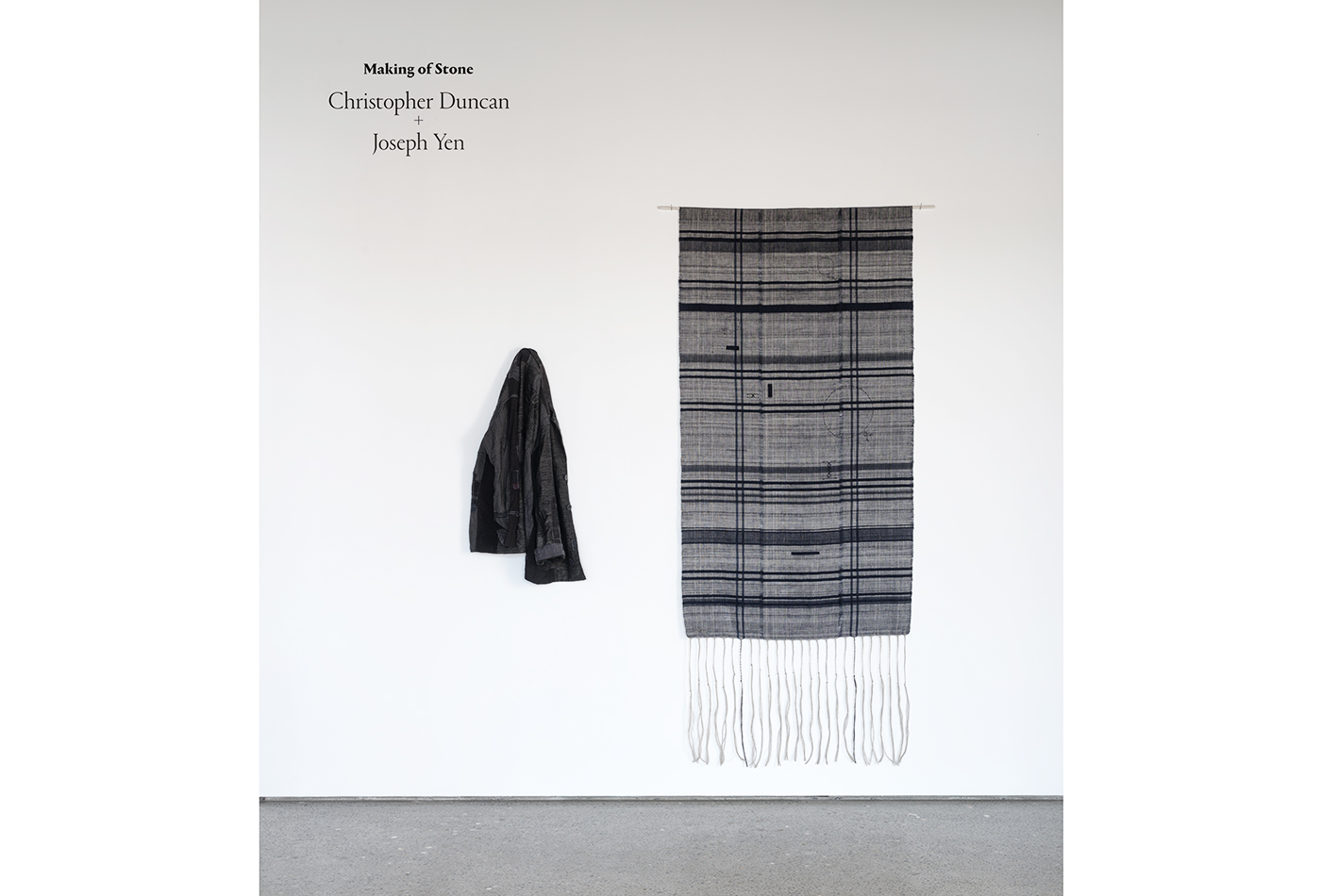 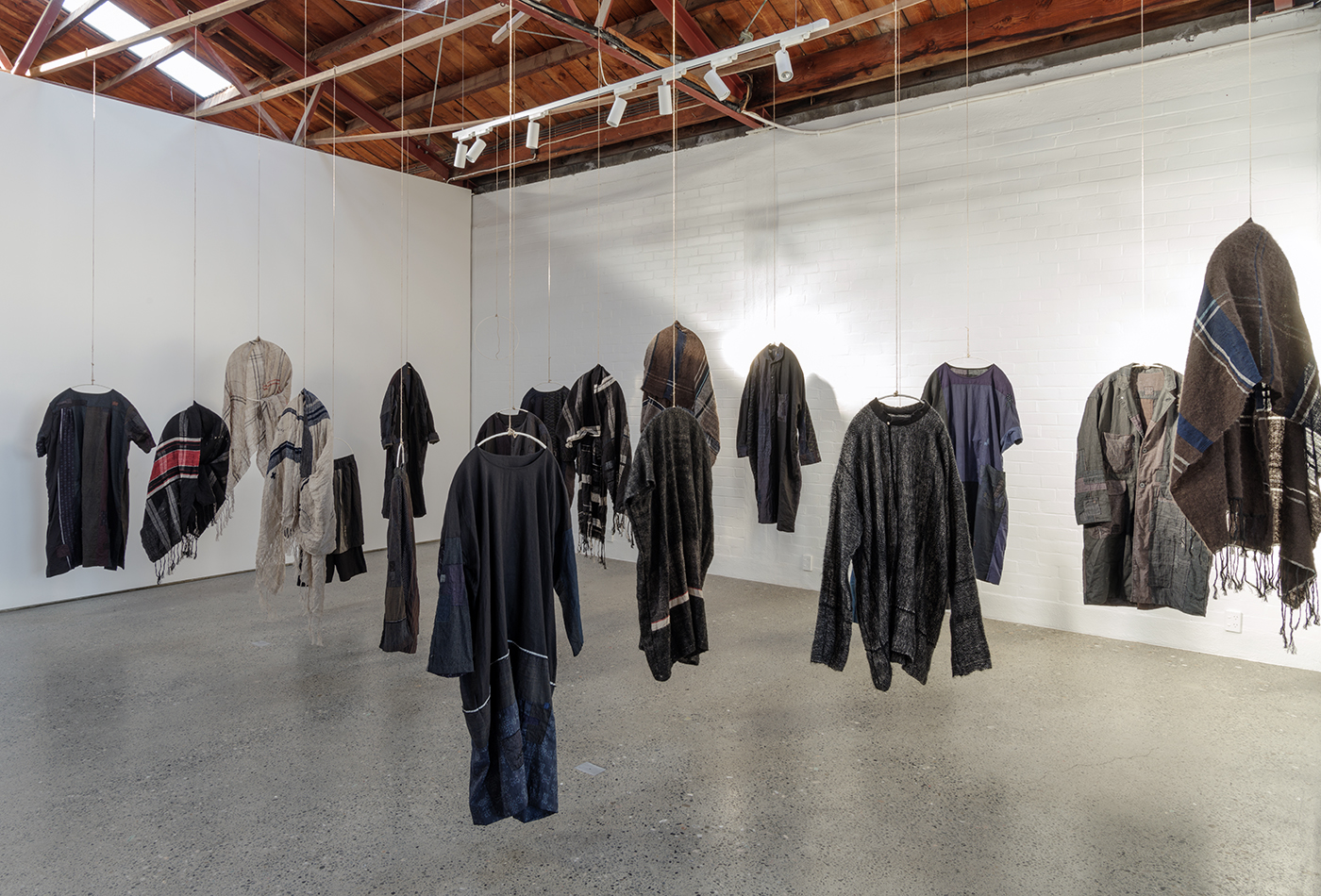 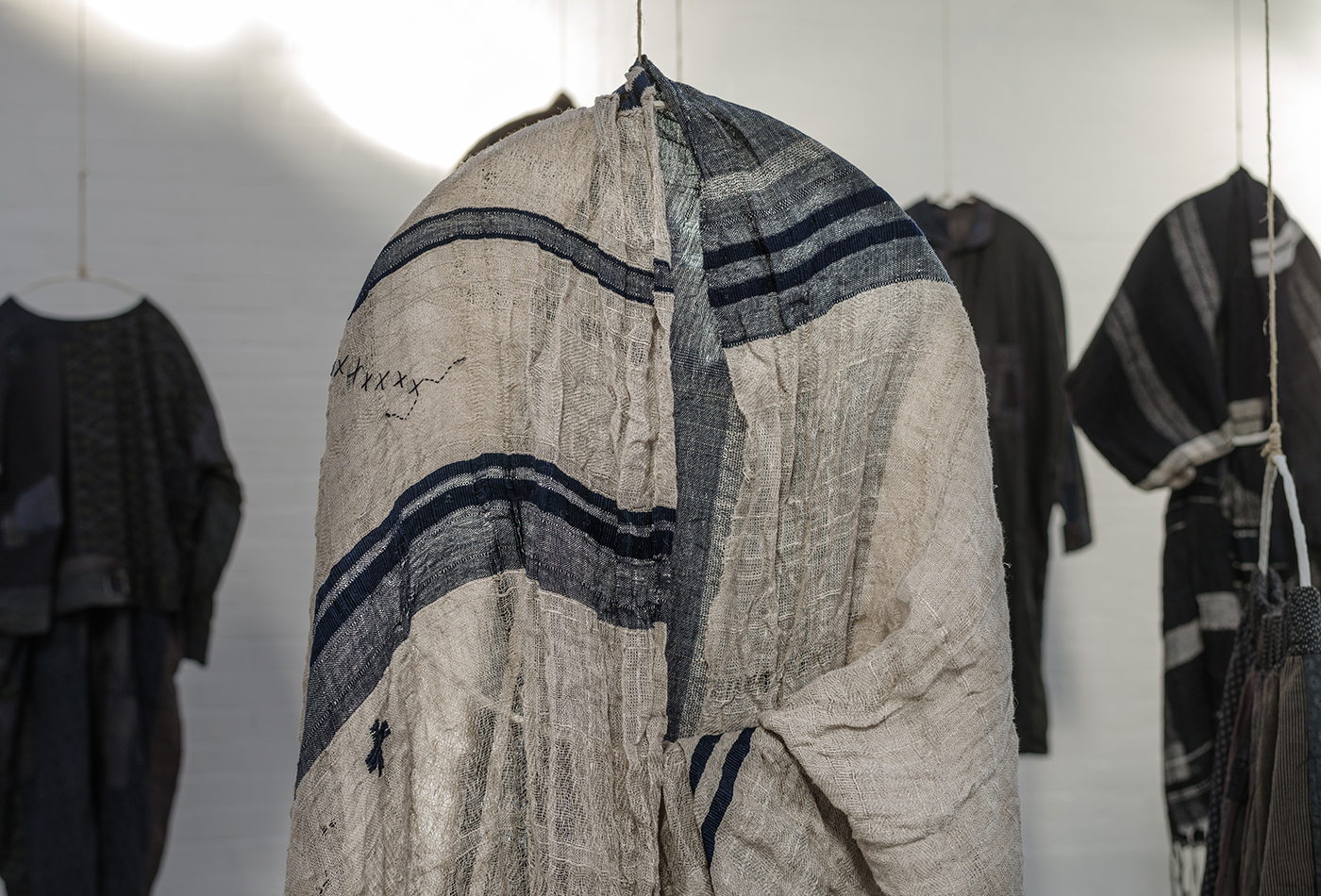 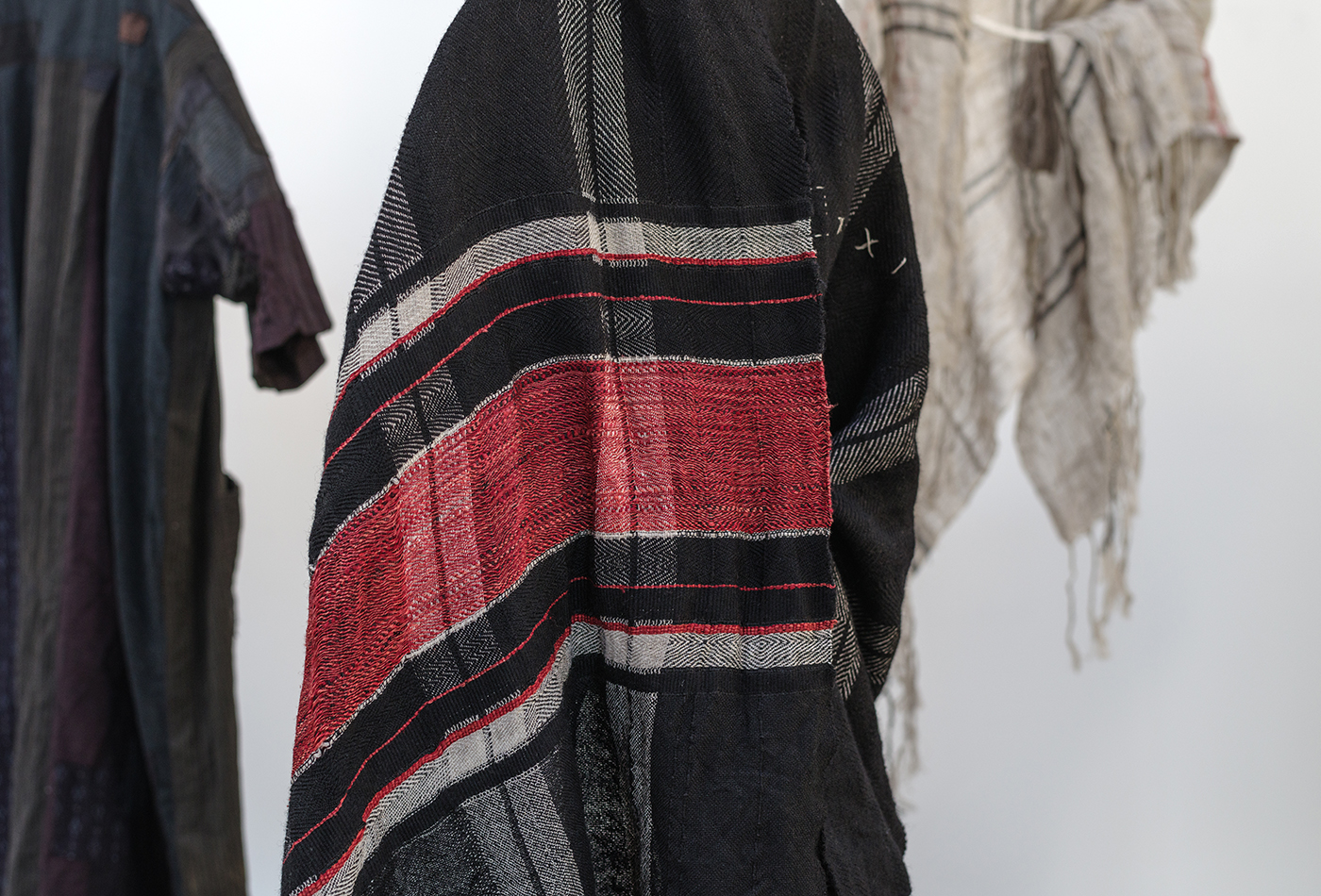 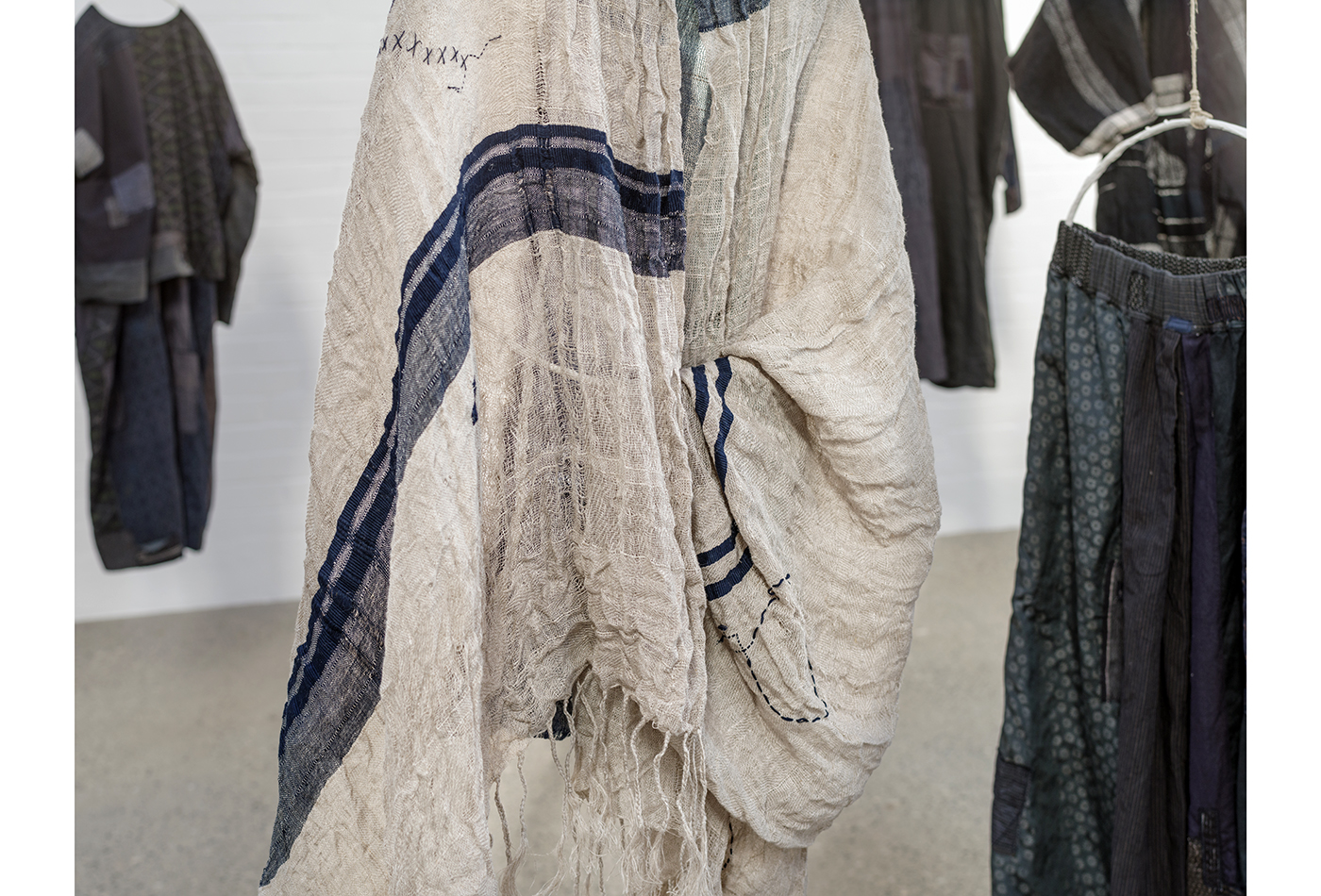 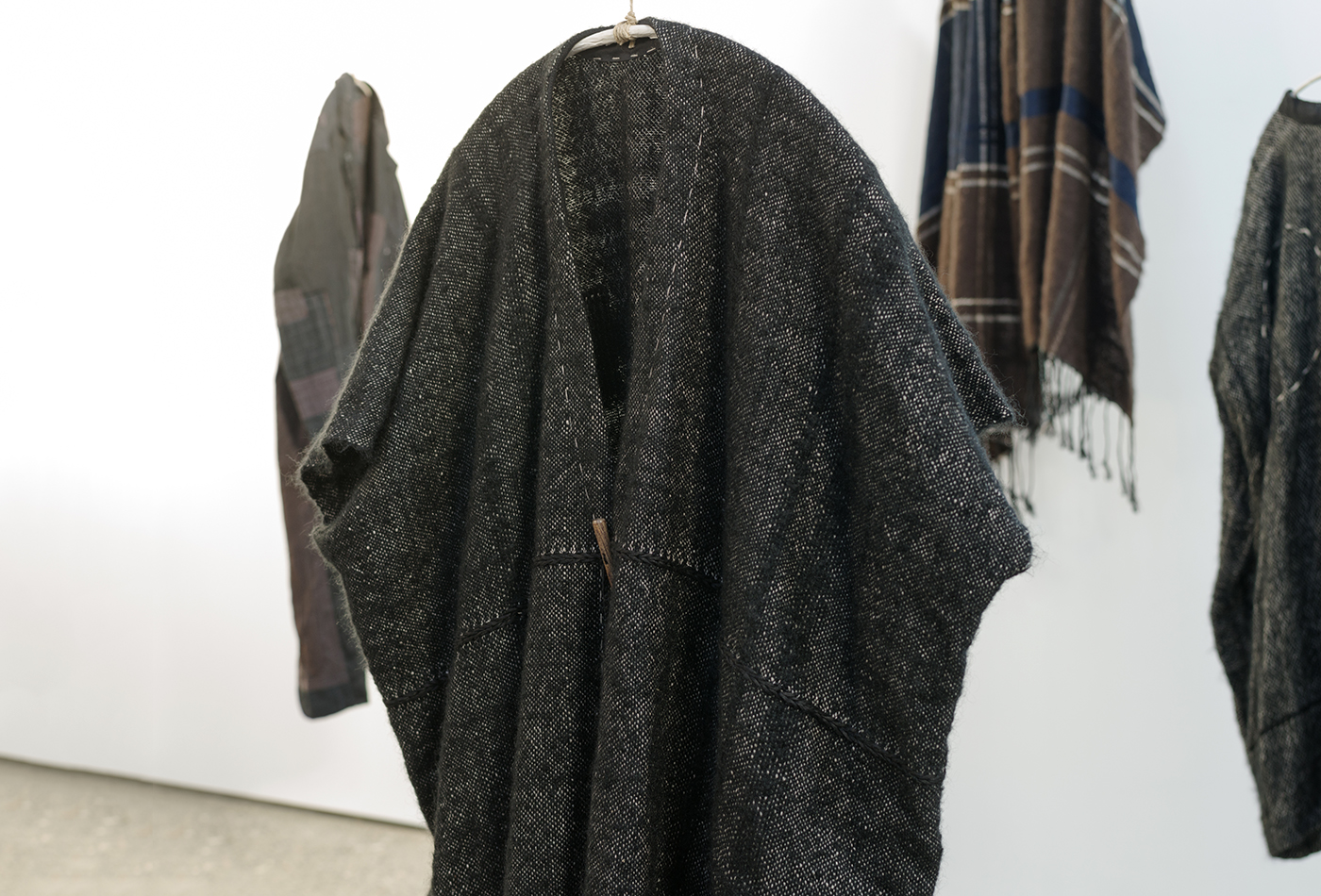 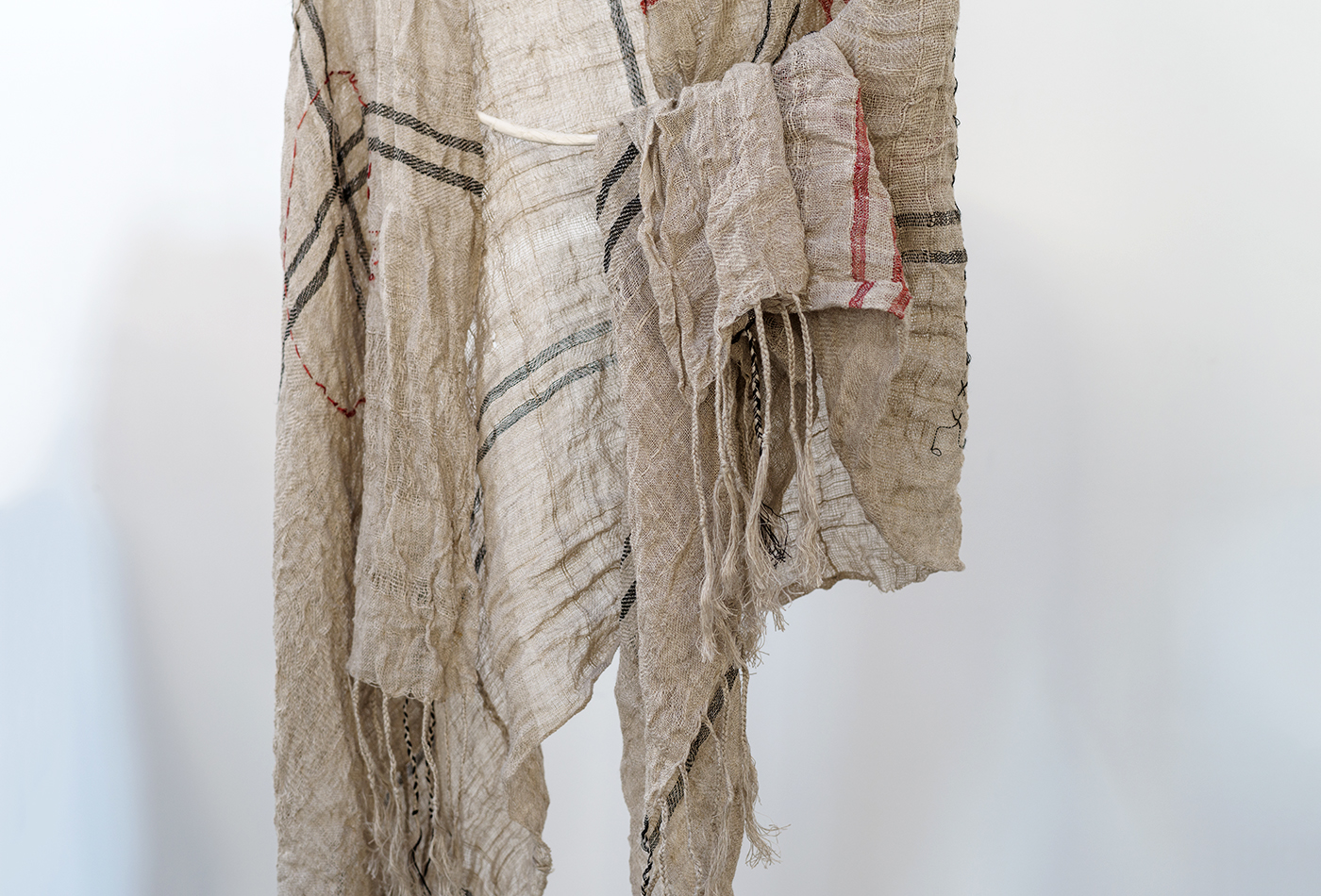 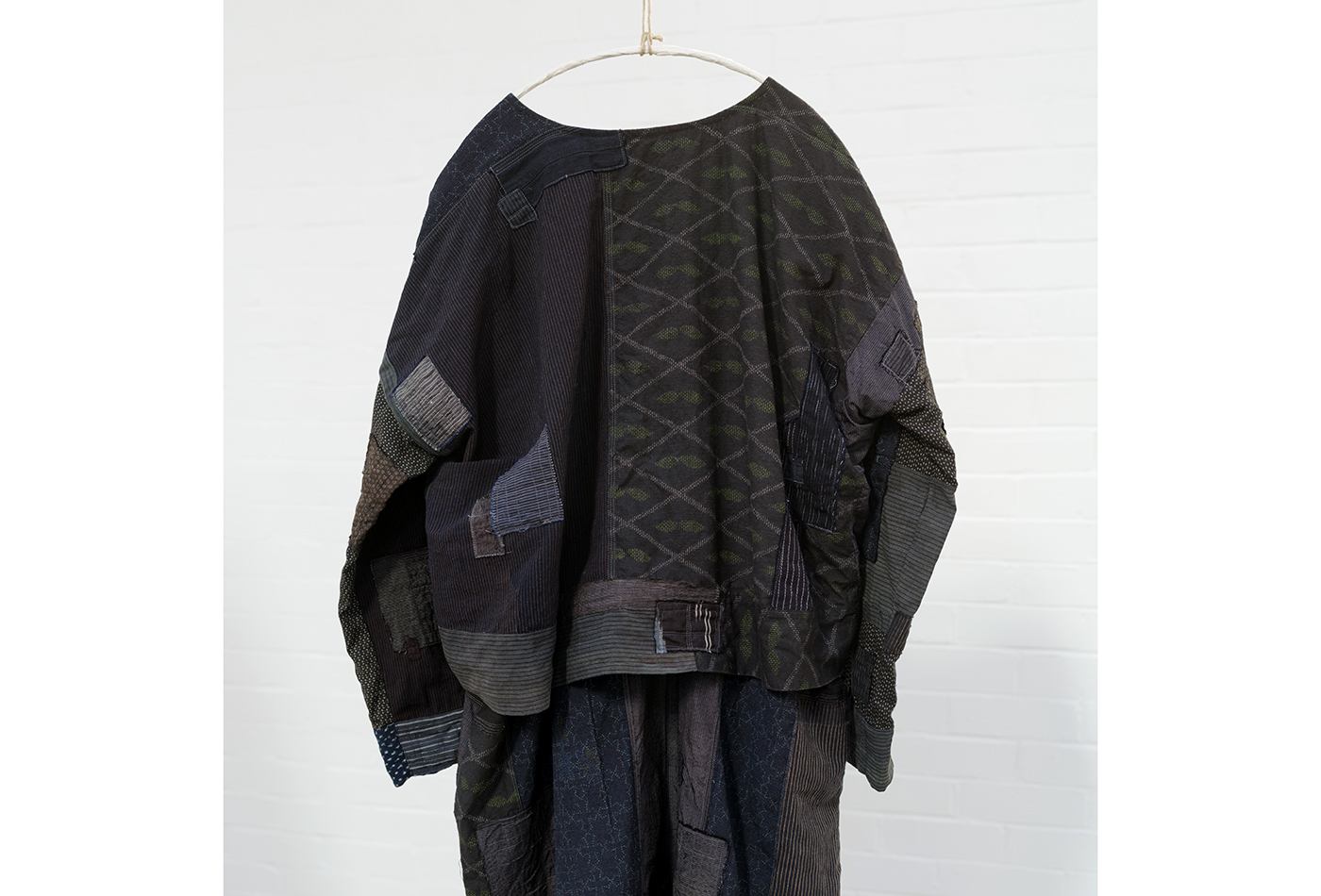 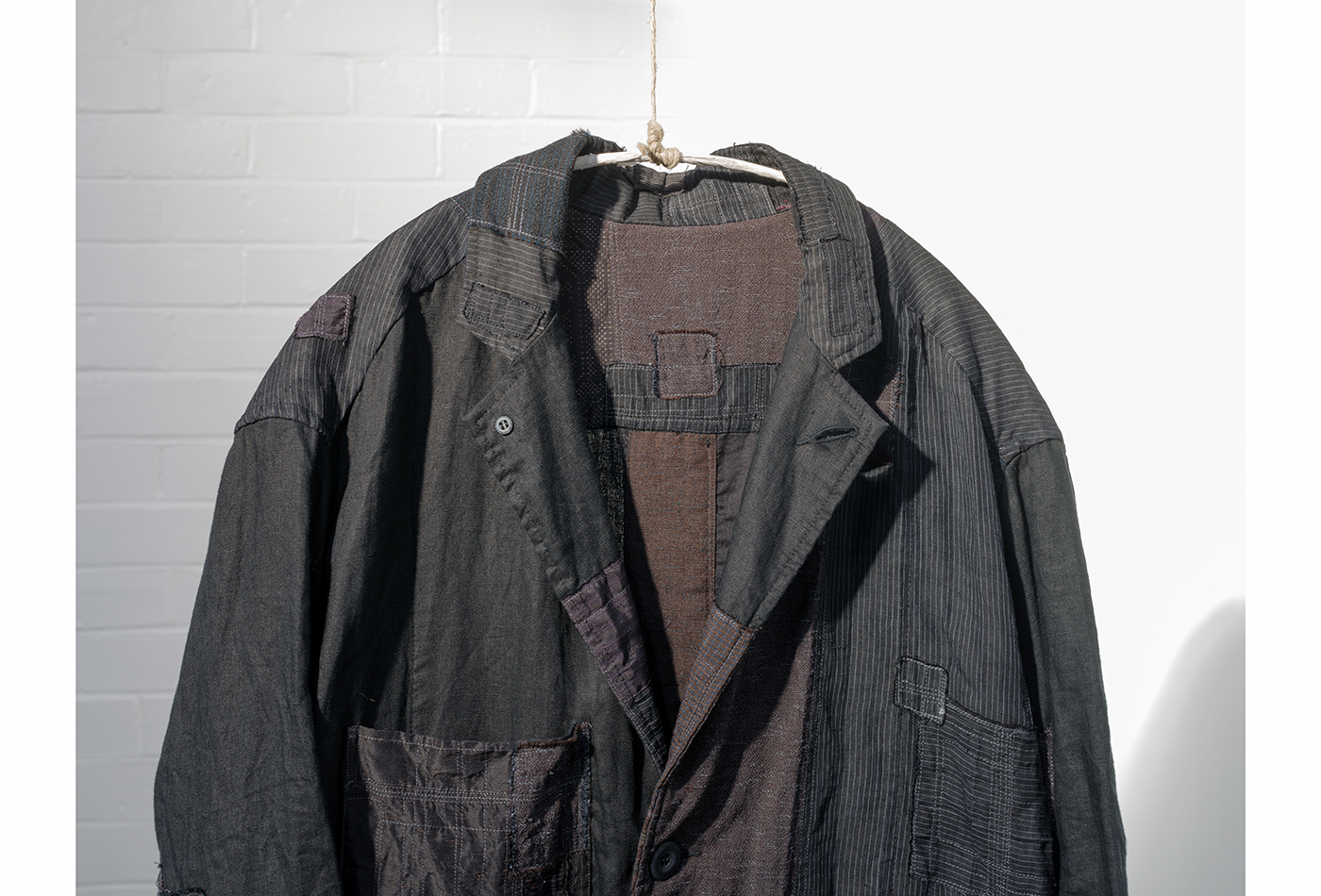 A single drop of water alights on the crease of a leaf in the gloaming. Yet is not alone, not one, rather formed within a field of particular and perfect others, gently glowing, as the night sky begins to rest its breath on the body of the earth each evening.

A droplet falls on stone. Its fleeting contact and watermark are swiftly followed by another. A river. A soft body that, in its very softness, cuts a way. Tracing time with the belly of its own nature.

Pattern languages emerge from the perennial relationships between things and forces; the suchness of an action or substance exchanging an aspect of its quality, sharing something of its nature and influence with another. Winds, temperature, pressure, motion. Light, hammer blows, weft. The hoof marks of a stock trail, the branching impetus of plants. All around us exist rhythms of mutual influence and effect, human and non-human, temporary and timeless.

Christopher Duncan and Joseph Yen locate their making practices within such an awareness. Resting their attention on simple and sustained making processes, Duncan and Yen seek the silhouettes cast by repetition and relationship, tension and flow. For both makers Making of Stone is an allegorical reference that connects human labour to a wider ecological consciousness. It is a metaphor for slowness, for time on a geological scale, that speaks to modesty and mindful craftsmanship, from single stich to complex weave.

Working exclusively with carefully sourced and recycled materials, the emphasis on rhythm, repetition, pattern and relationship that characterize each makers studio-based approach extends to their processes of sourcing and gathering, encompassing their understanding of, and respect for, their materials. Making then, is understood by Duncan and Yen as a mode of engaging. A way of defining gentle terms of being in the world.

Christopher Duncan is a contemporary craft practitioner specialising in hand woven textiles. Largely self-taught, Duncan began weaving in 2012 after a career in the fashion industry, teaching himself through gifted looms and materials and gradually creating his own library of weaving knowledge and techniques. Duncan approaches his practice as an anchor for a life lived with gentleness and meaning, mindful of the political histories and ecological impact of the textile industry globally. His own practice stems from traditional techniques with which he combines non-repetitive lines at vertical and horizontal intersections. Inlaid motifs are iterated across the textile, breaking up the rigid forms typical to the cross-sectional nature of the loom. Duncan has exhibited throughout New Zealand and Japan and his work is held in the collections of Auckland Museum Tamaki Paenga Hira. In 2018, Duncan was the recipient of Dame Doreen’s Gift, an award established by The Blumhardt Foundation in 2016 to support the development of exceptional emerging makers in the field of craft.

Joseph Yen is an Auckland based craftsman working in clothing design and silver, who distributes and exhibits his work under the moniker, Thyen. Yen is interested in ideas of memory, pattern and repetition and works with simple androgynous designs that reference both modern and ancient pattern-making. Working with fine, natural and antique textiles, Yen has developed a distinct combination of pattern-making and collage through which he seeks to collect and repurpose the subtle shadows and memories of each fabric. Through sensitive processes of collecting, shaping patching and stitching, Yen aims to work in a way that binds lived history to the future, emphasising an embodied way of being in the world that is too easily lost in language. Joseph Yen/Thyen exhibits internationally with work currently on display The Service Depot, Wellington and Stardust, Kyoto.

In 2014 Duncan and Yen opened TÜR at 486 Karangahape Road, Auckland, New Zealand. Conceived as an open studio that would operate as both a making and exhibition space, Tür, showcases textiles, painting, metal objects and ceramic works from New Zealand, Japan and Taiwan.