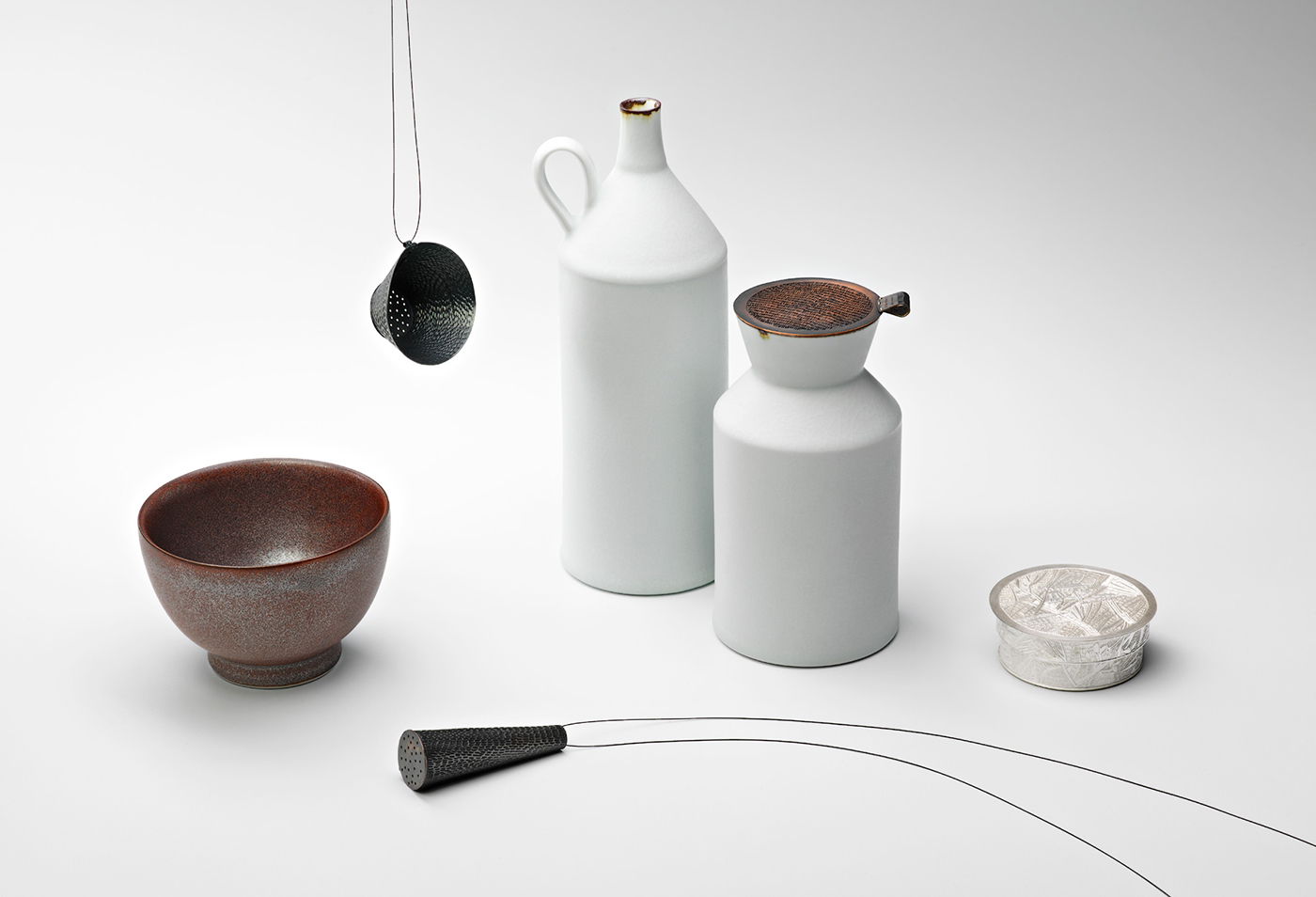 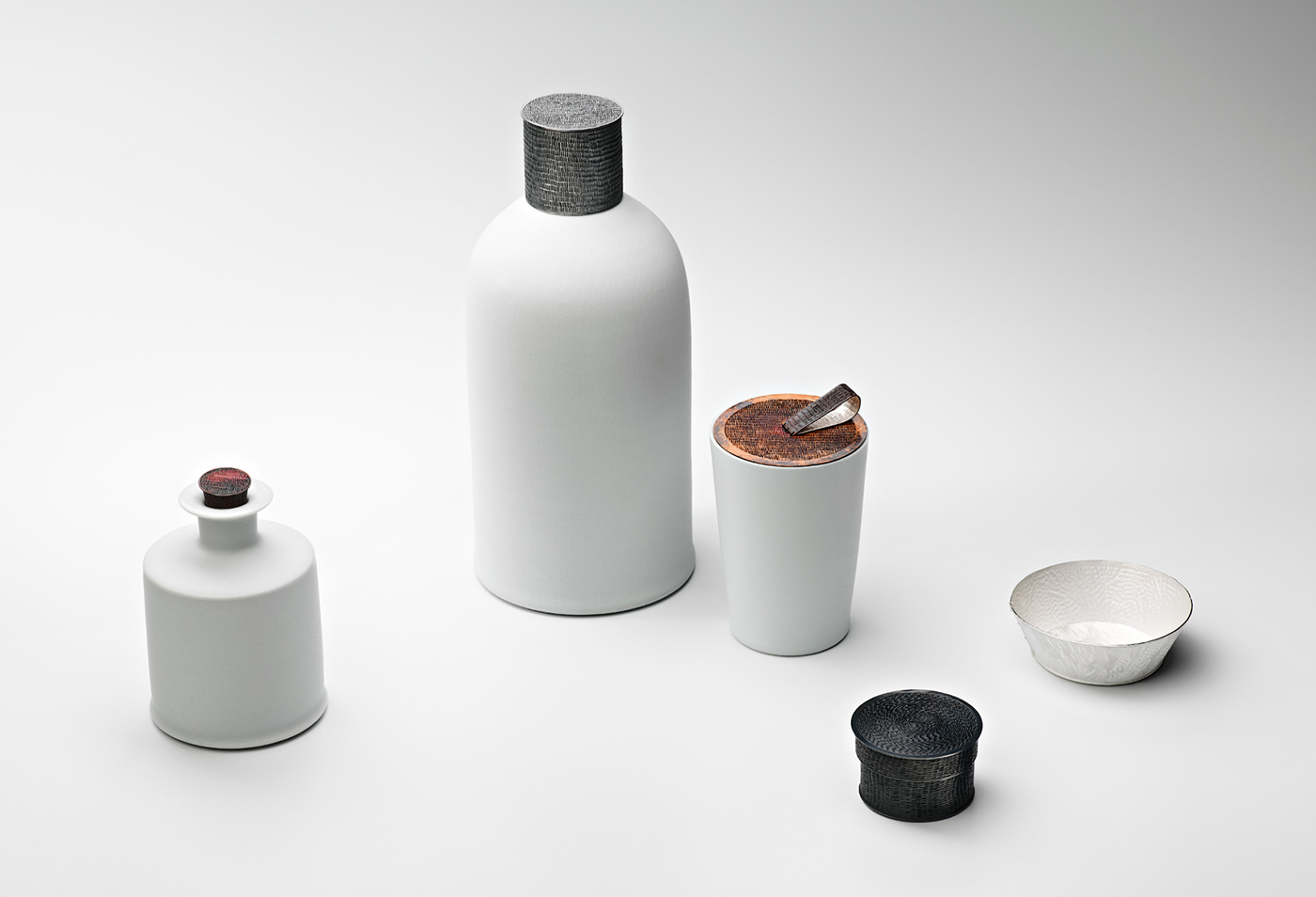 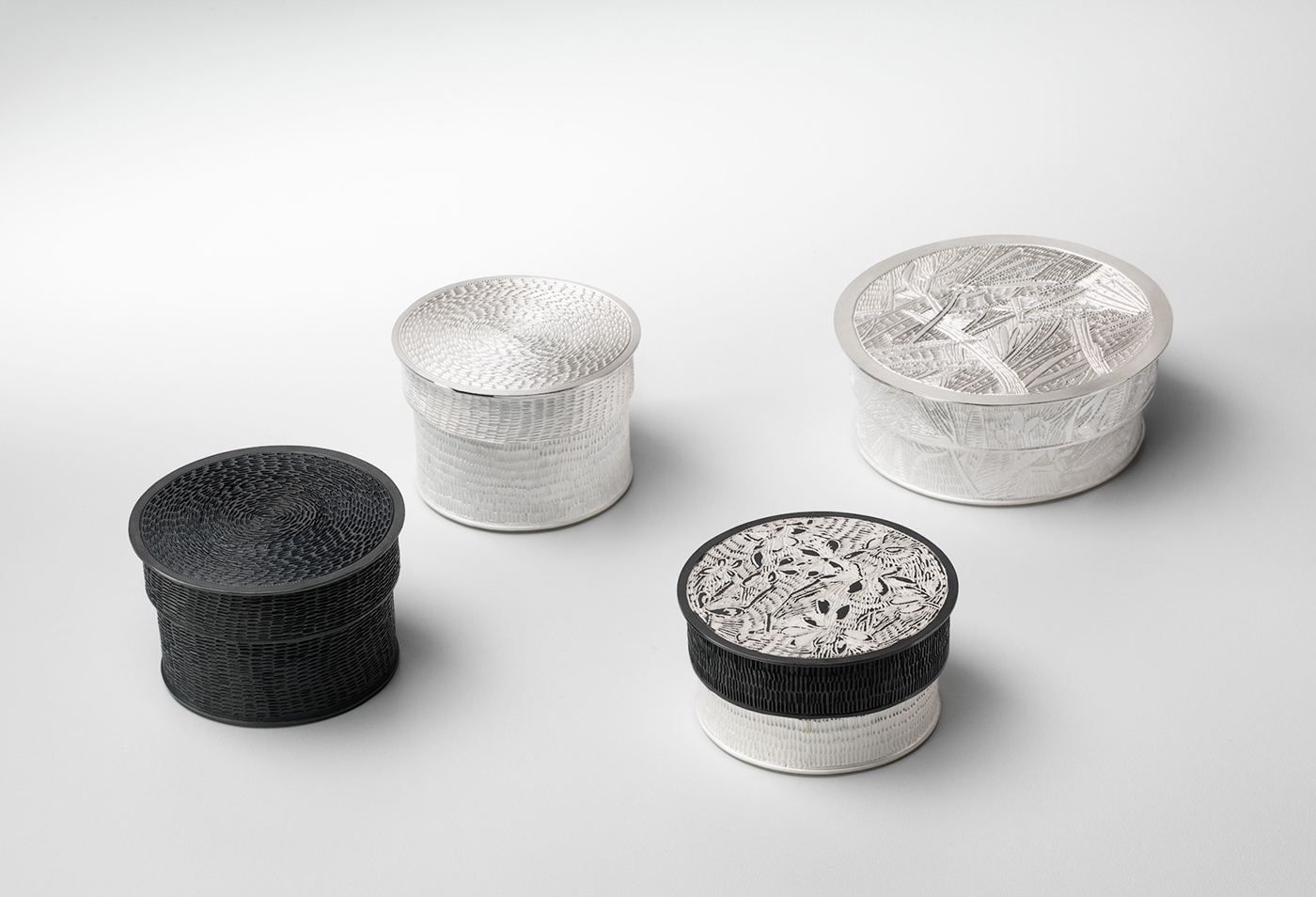 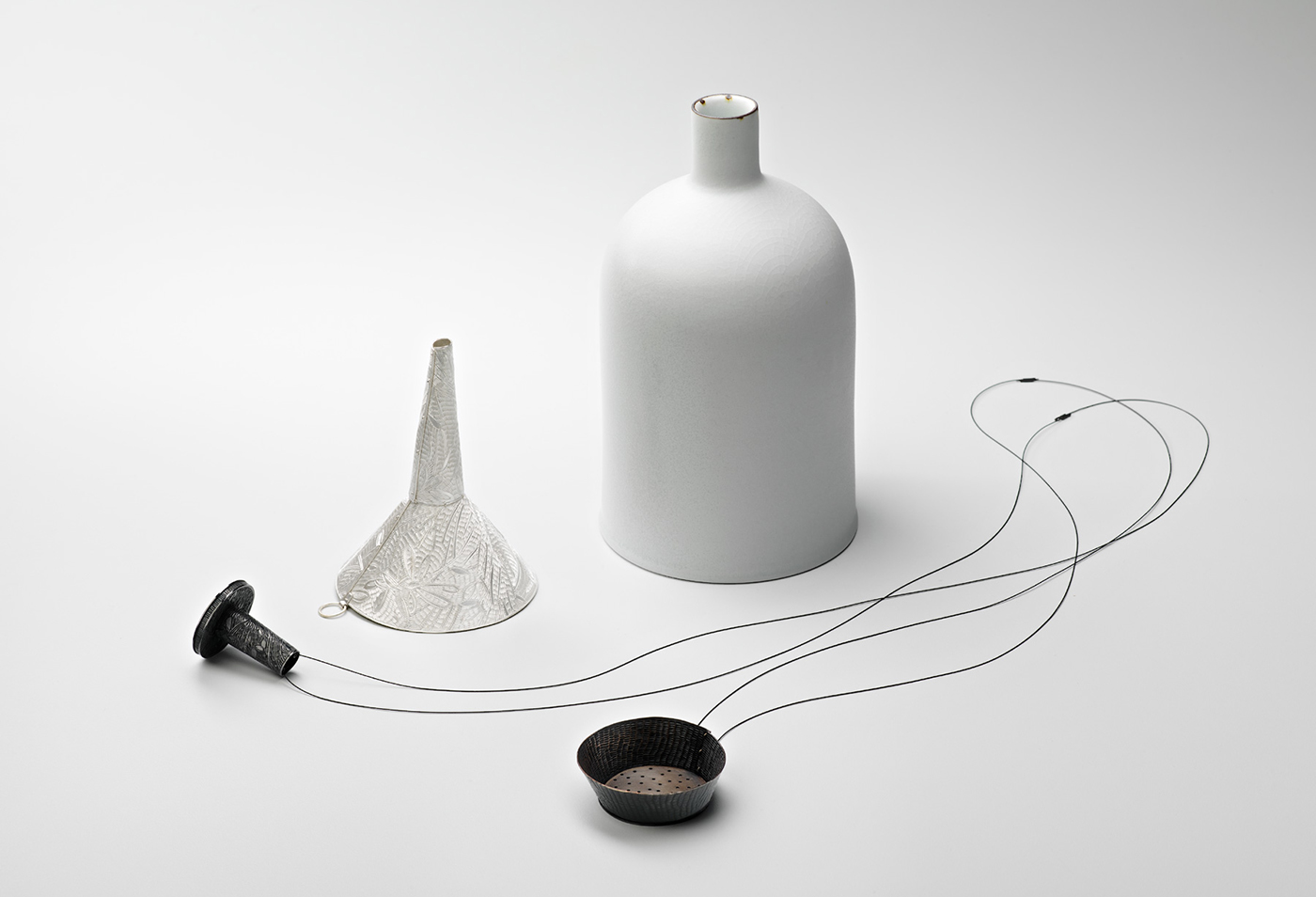 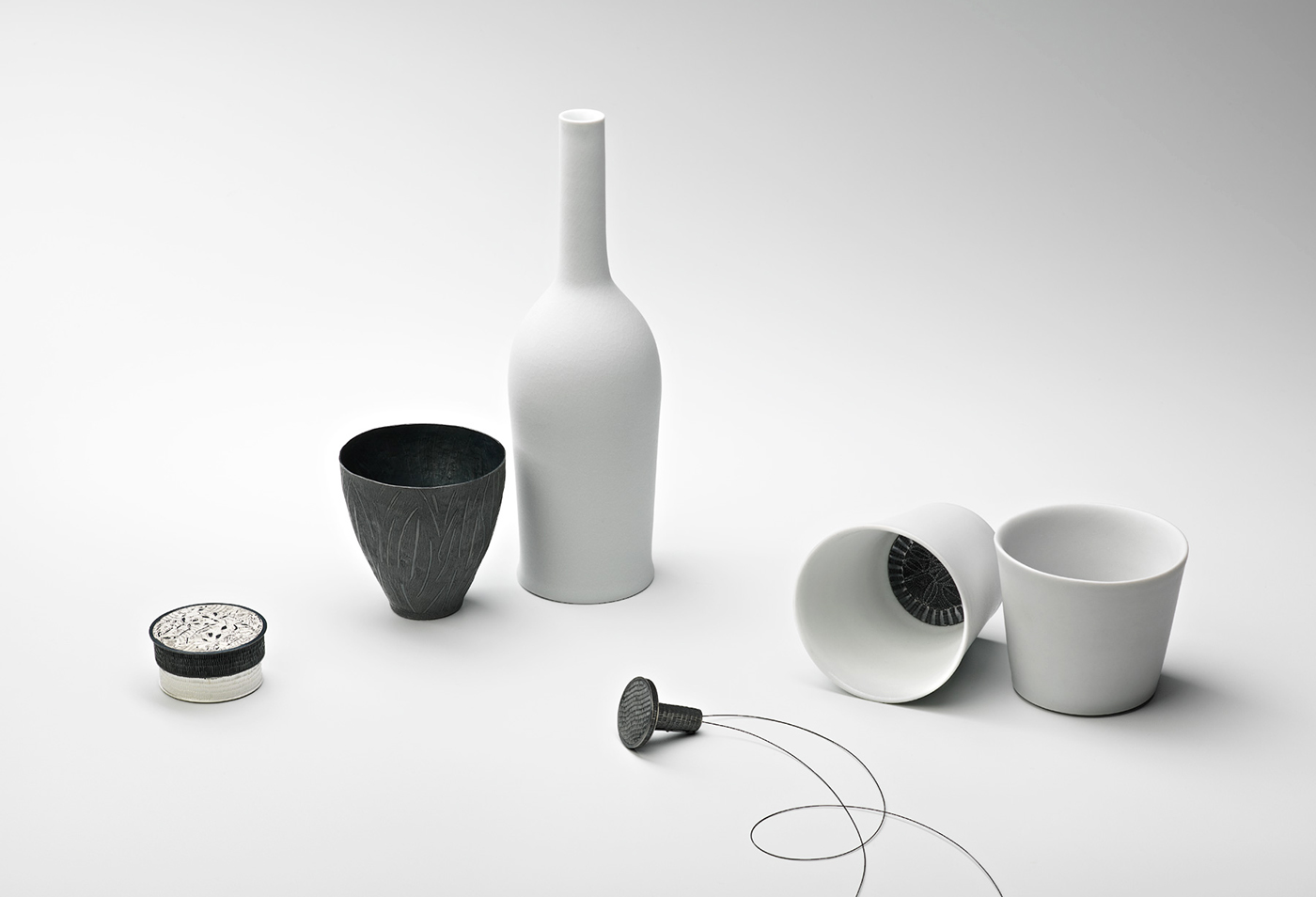 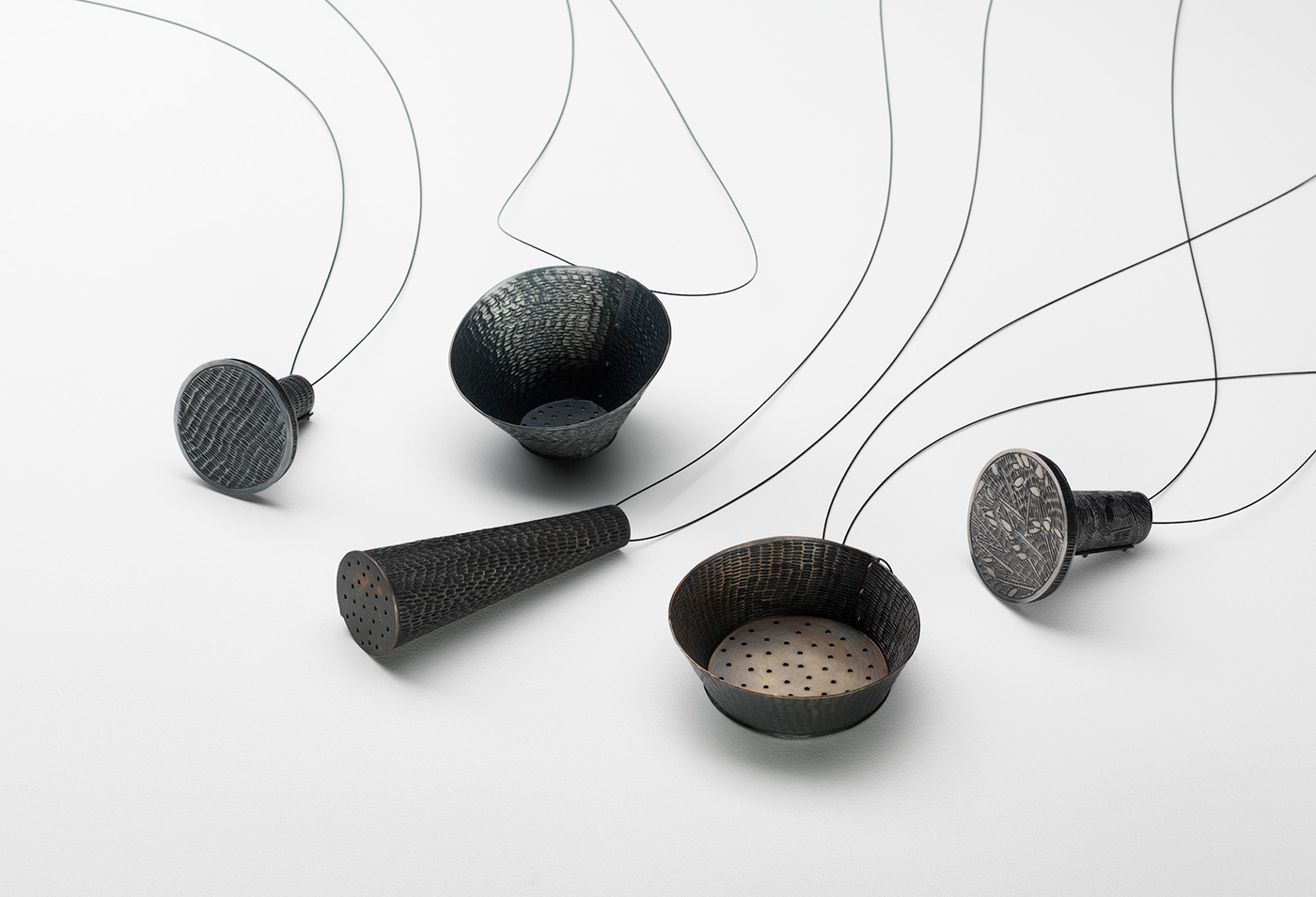 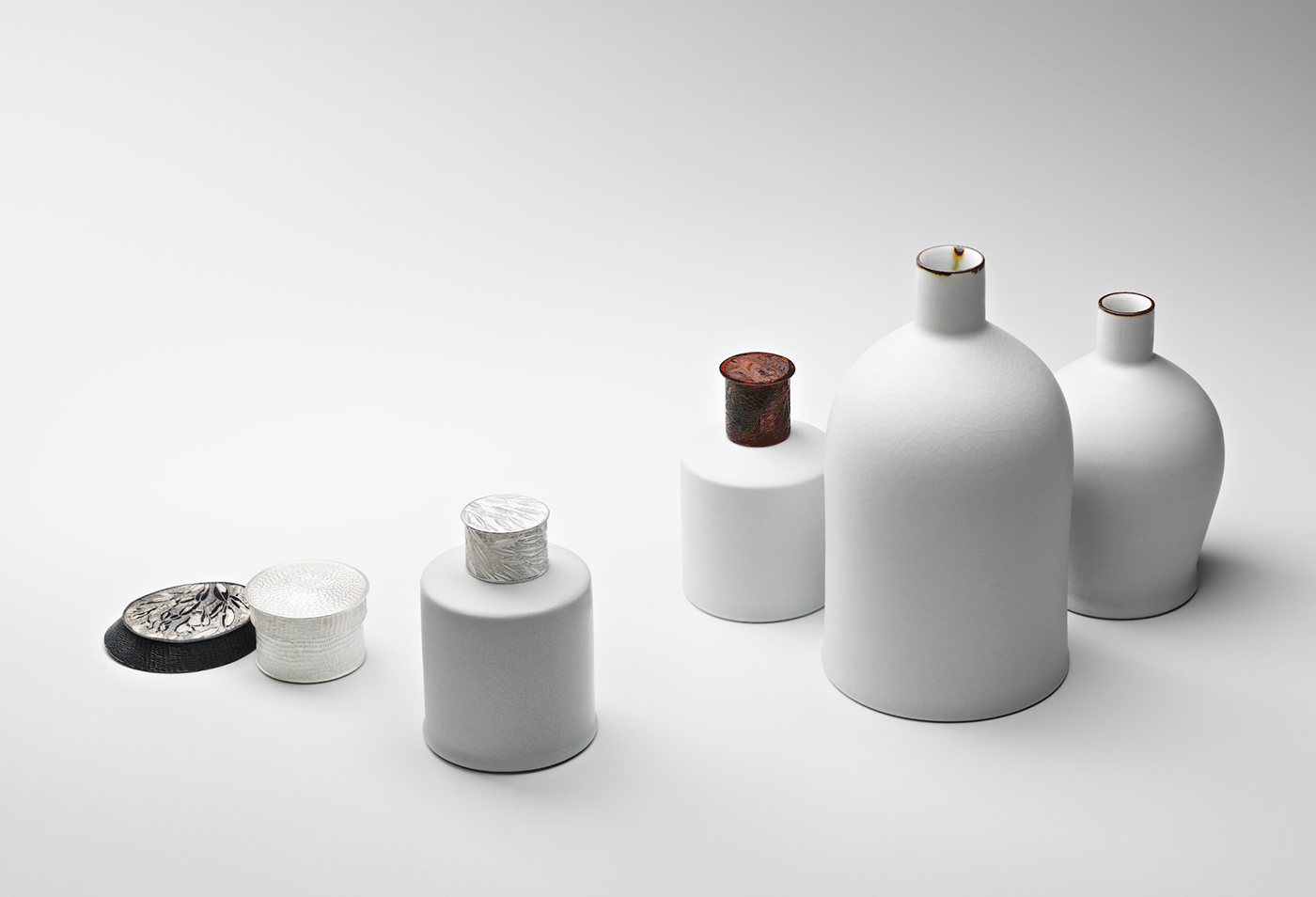 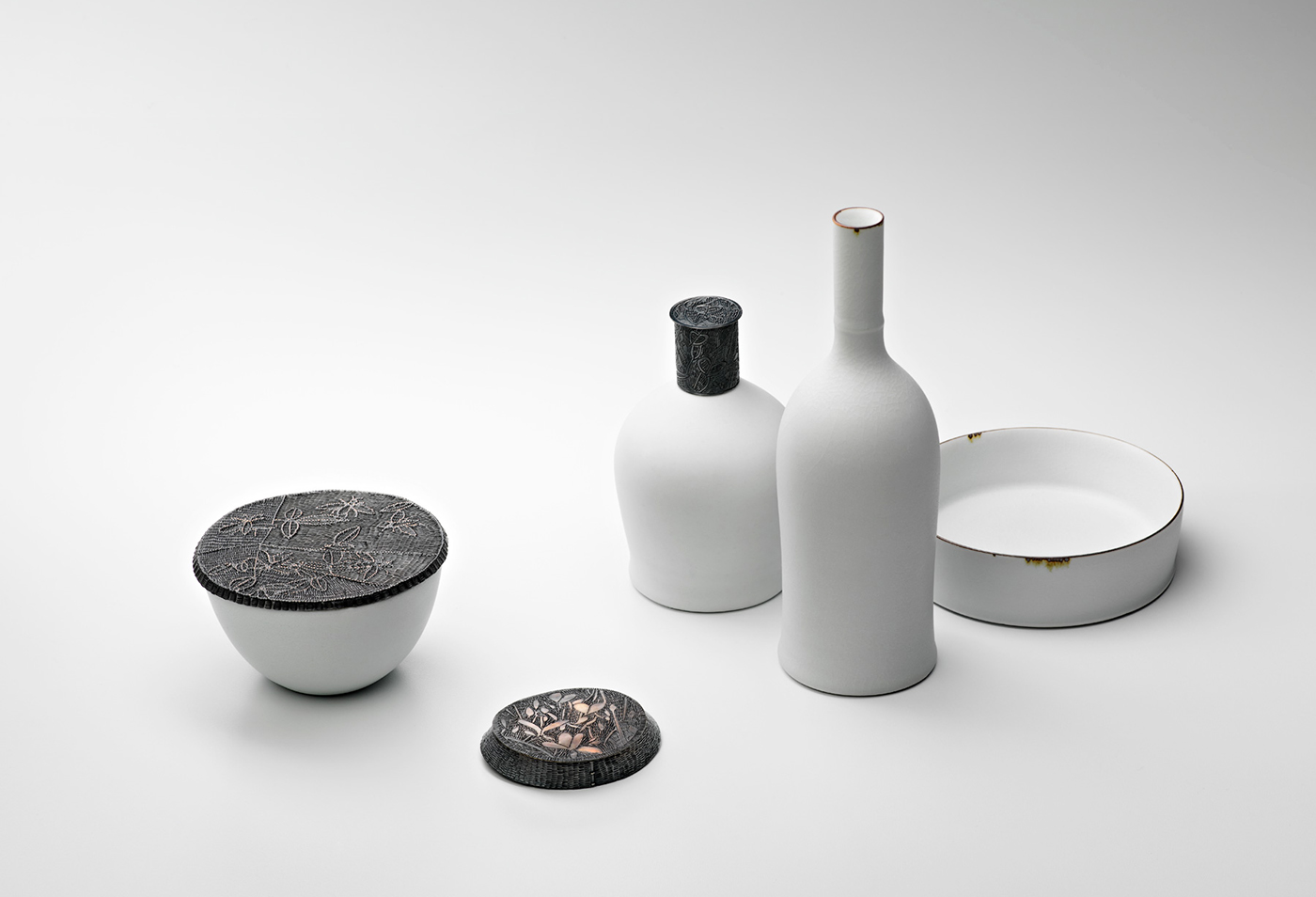 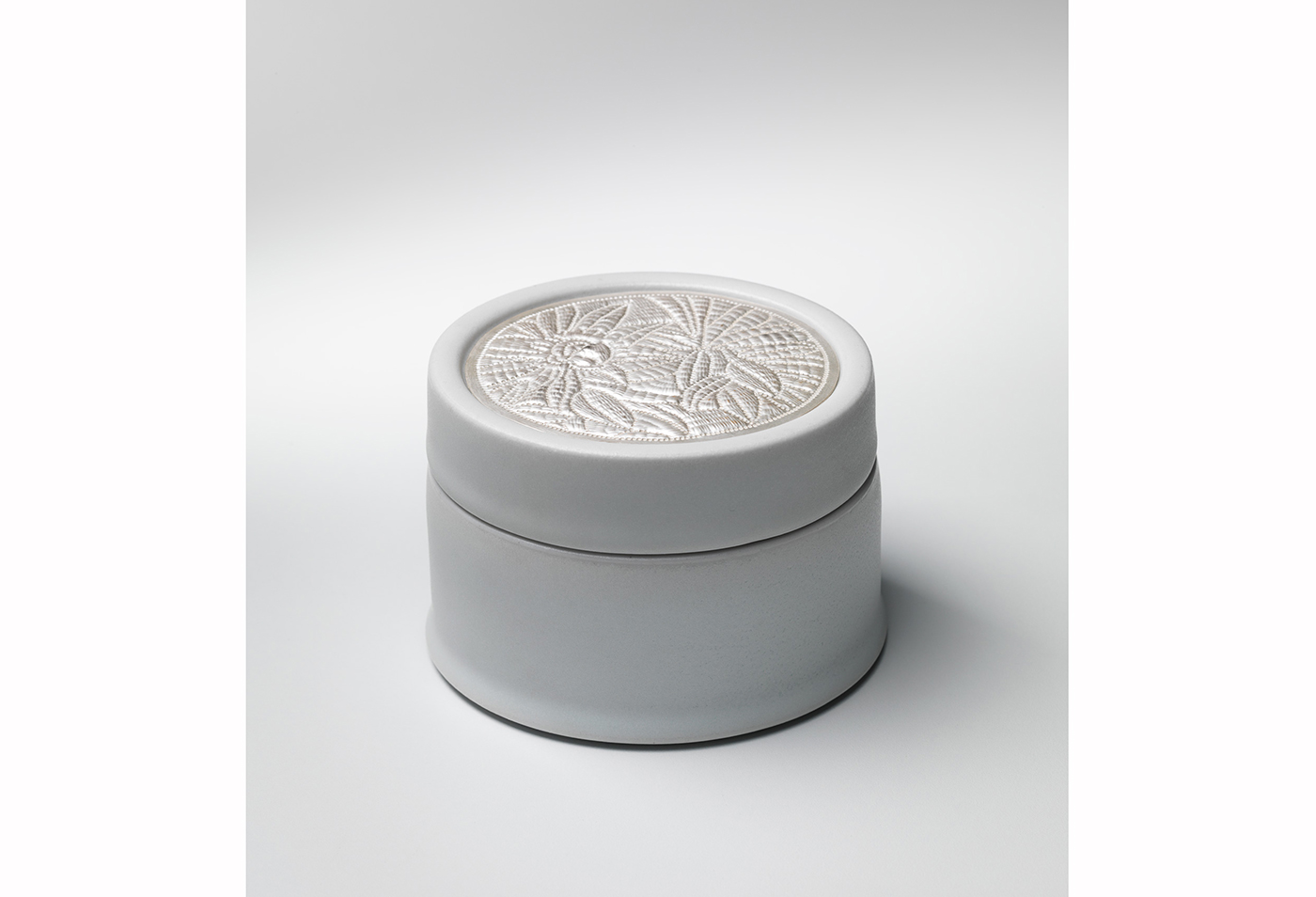 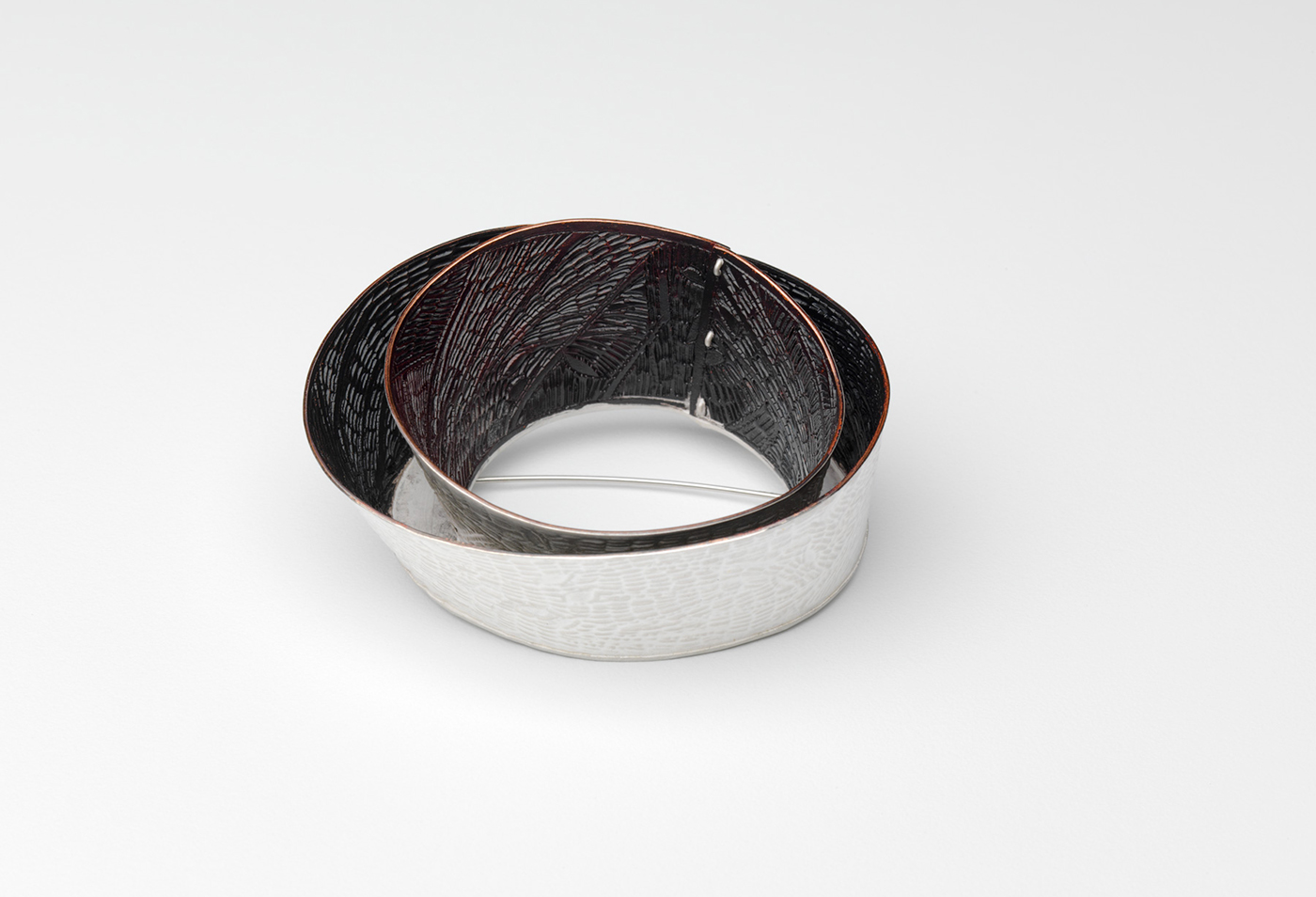 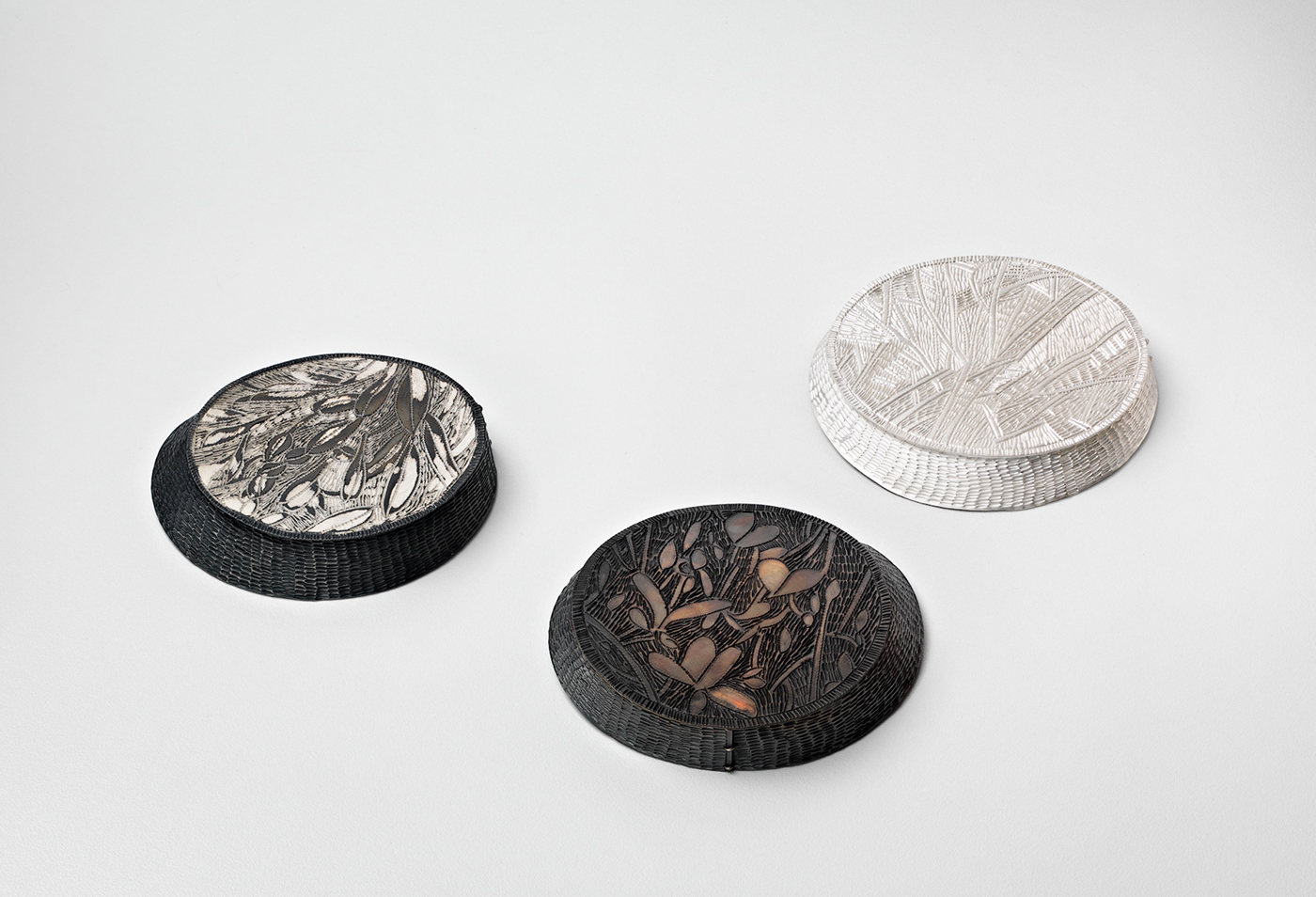 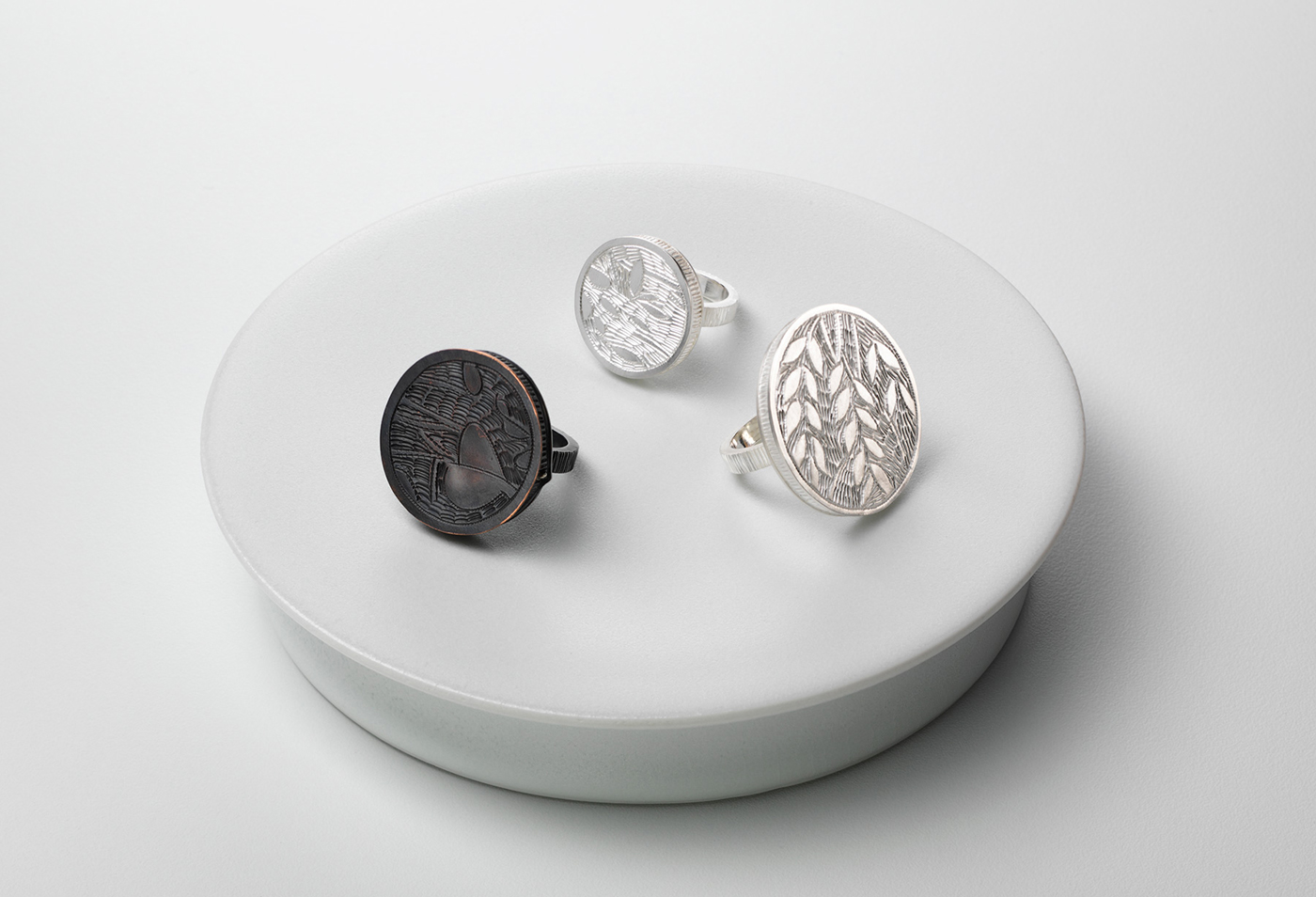 “In an inspired contemporary interpretation of Ormolu, silversmith Julie Blyfield and ceramicist Kirsten Coelho have collaborated to create a suite of porcelain containers with intricate silver lids and an accompanying collection of jewellery.  Historically the decorative style of Ormolu involved lavish ornamentation of furniture, clocks and ceramics with gold-coloured metal alloys. The Chinese combined metal and porcelain in tea caddies, while the English created Ormolu snuff boxes and trinket containers, and made repairs using metal staples and components to prolong the life of an object. There is a rich history, too, of the Japanese Kintsugi tradition of repairing ceramics with gold, silver or platinum.

In their reinvention of these European and Asian traditions Coelho and Blyfield turn to humble domestic objects and ornaments that bear testament to an earlier Australian way of life. Together they have researched the historic connections between pottery and metalware in the Moonta Mines Museum, the South Australian Museum and the findings of the archaeological dig on the site of the Royal Adelaide Hospital. Their pieces inOrmolutake inspiration from domestic utensils, mining implements and objects to be found on dressing tables and kitchen dressers.

Both artists share an aesthetic approach that involves the ‘making precious’ of these humble objects through the time and skill invested in their making. They have a shared interest too in the way an object’s meaning can shift and accrete new associations over time in response to changes in the social and cultural context as it passes through generations of owners or is re-positioned in a museum collection. Their collaboration grew organically out of an awareness of each other’s practice over the years and developed in a series of meetings and conversations.

Kirsten Coelho’s refined porcelain forms are a reinvention of everyday utilitarian lidded forms such as ginger jars, tea caddies, storage containers and bottles, as well as the open forms of jugs, cups, bowls and funnels. As a delicate counterpoint to the sublime simplicity of the porcelain, Julie Blyfield in her ornamental stoppers and lids, and in her suite of jewellery,subverts the shiny allure of silver, darkening it through oxidisation so that it resembles baser metals like tin and pewter, or softening its sheen to a lustrous matt finish. In a specific reference to Ormolu she sometimes combines fine layers of copper and silver in bimetal stoppers, where the reddish glow of copper emerges through the blackened silver as a burnished palimpsest.

An alloy is a fusion of metals to make a stronger new compound. Ormolu by Kirsten Coelho and Julie Blyfield is a metaphorical as much as actual fusion of fine crafting skills, to make precious things inspired by the humble objects of everyday life”.

Julie Blyfield has worked for over 30 years as a jeweller and metalsmith. Her work is inspired by research into botanical specimens, the diversity of the Australian landscape, and social and historical collections.

Julie was previously a partner at Gray Street Workshop, Adelaide (1987-2009) and now works from her home studio. In 2007 she was recipient of the prestigious South Australian Living Artist Award which celebrated her achievements with a major Monograph about her life and work, published by Wakefield Press. Julie’s jewellery and metal work is held in national and international museum collections including the National Gallery of Australia in Canberra; the Musée des Arts Decoratifs in Paris, France; the Victoria and Albert Museum in London, United Kingdom.  As part of her practice she regularly mentors emerging jewellers sharing her knowledge, skills and professional experience. She has lectured and presented workshops in Australia, United States of America and in the United Kingdom. In 2011 she was Overall Winner of the South Australian Museum Natural History Art Prize when her work was acquired for the South Australian Museum collection.

Kirsten Coelho works in porcelain creating refined works that fuse the formal and the abstract. Her work has been influenced by nineteenth and early twentieth century enamel wares and the surface possibilities these objects can show as they begin to age. The reference to archetypal household items also reflects on the experiences of the many migrants and settlers to Australia at that time. The extraordinary dreams, ambitions and failings of this period are contained in Coelho´s works, which consider how objects and art shape history and cultural memory.

In 2018 Coelho was featured in the Adelaide Biennial of Australian Art: Divided Worlds curated by Erica Green. In 2015 Coelho was honoured with a solo exhibition at Drill Hall Gallery at the Australian National University and the Newcastle Art Gallery NSW, and undertook an invitation only Residency at Tweed Regional Gallery. Coelho holds a Master of Visual Arts. Her work has been exhibited internationally at Art Basel Hong Kong with THIS IS NO FANTASY, Adrian Sassoon London, the Scottish Gallery UK, Ann Linnemann Studio Gallery Denmark and Matin Gallery LA.  Her work is represented in numerous institutional collections including the National Gallery of Australia, Art Gallery of Western Australia, Art Gallery of South Australia and Queensland Art Gallery/Gallery of Modern Art, Chatsworth House UK and the Boymans Van Beuningen Stichting Museum NDL.  In addition to winning the City of Hobart Art Prize in 2015, Coelho has also won the coveted Sidney Myer Ceramic Award 2012, and was a recipient of the Josephine Ulrick Ceramic Award in 2005.